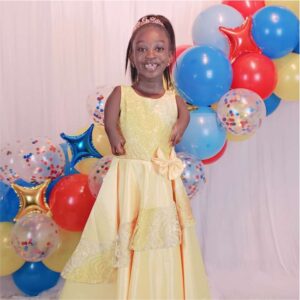 Hephzibah Inioluwa Dada is beautiful, gorgeous, brilliant, intelligent, resilient, energetic, loving, strong-willed, determined, kind-hearted, iconic and above all very special and unique in her own way.

Hephzibah Inioluwa Dada was born on September 23, 2014. After birth, she was diagnosed with multiple congenital heart defects, shortage of upper extremities and absence of some digits on both hands.

Phocomelia syndrome is an extreme rare birth defect, in most instances, by severe malformation of the extremities and digits. In people with this condition, the bones of the affected limb are either missing or underdeveloped. Phocomelia can be inherited as part of a genetic syndrome or maternal exposure to a certain drug (like Thalidomide) during pregnancy. Unfortunately, there is no specific treatment for Phocomelia other than managing all the complications that may arise.

For Ini as she is fondly called, the mum cannot recall being exposed to the said drug (Thalidomide) during pregnancy, but she may have inherited the genetic syndrome from the “parent”. After she was born at Ben Taub Hospital, Houston Texas, she was then transferred to Texas Children’s Hospital where she has been under closed observation and receiving treatment till date. Ini remains medically complex and needs close monitoring. Due to the malformed heart, she has had series of medical procedures from Pulmonary arterial band to restrict extra blood from going to her lungs, to cardiac catheterization to series of open-heart surgeries, hand pollicization and dental procedures amongst others. Ini is currently on Beta Blocker, Antihistamine, Blood thinners etc. to further manage and prevent the complication of her medical conditions.

One constant figure in Ini’s life is her mum (Maria), who has been her rock and has braced herself to cope with both challenges to raise a child with special features and a blessing to nurture her daughter who has refused to give up on life nor allow her physical condition to limit her both cognitively or physically. The early days were difficult, raising her from cradle, Ini did not sit up nor crawl like every other child. After much therapy interventions, (thanks to the Early Child Intervention team), she scooted on her bottom due to lack of support of her both hands. In spite of all these challenges, she was resilient and fought through, she sat and also scooted on her bottom all thanks to the several therapists that had been in her life up until now. She has had previous and present Occupational, Physical, Special skills and speech Therapies.

As she grows older and becoming more aware of herself, her mum has taken it upon herself to make her see how special she is and never to feel less of herself regardless of how she looks physically. Hephzibah constantly wondered and ask her mum, why she is different from other kids, but the answer has always been “because you are very special and unique”. Ini has some special abilities like using her feet to navigate the tablet or computer and to do other stuffs like dressing, pick up things like her books etc.. Today Ini is attending a regular charter school and she is regarded as an a student; she has received a couple of awards even though she is still in Kinder. She is an embodiment of joy, very talented, smart, brave and courageous young lady. Sky is just the beginning for her as she thrives forward in life and discovers many more unique and great talents ahead of her to exploit. She will be launching Hephzibah’s Foundation for Phocomelia’s kids and kids with any kind of congenital malfunctioned hearts in the nearest future, to support and encourage them to be what and who they are destined to be.

See what people are saying about Amazing Inioluwa.

Ini is resilient, strong-willed and can achieve whatever she set her mind to achieve. She is amazing all round.

Michelle Atanu
Occupational Therapist
Ini is so amazing she brings light and joy to everyone around her. She is incredibly smart and surely going places.

Jon Knight
Physical Therapist
Ini is so strong-willed, full of energy and expresses happiness always. She is so amazing. She is resilient and self-motivated

Behind the word mountains, far from the countries Vokalia and Consonantia, there